Tamura Nobuyoshi: The Sharp Blade - It Had To Be Felt #31 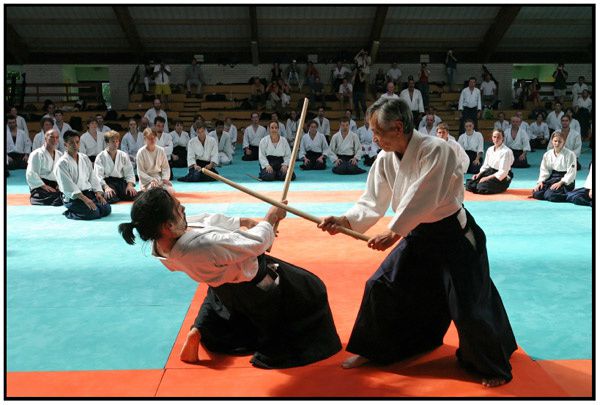 It Had To Be Felt #31 - Tamura Nobuyoshi: The Sharp Blade

The first time I met Tamura Nobuyoshi sensei was when I was 21. I had been training less than a week of aikido. My instructor was going to a seminar of Tamura sensei, his teacher, and he suggested that I join him. I wasn't an absolute beginner. I had started martial arts when I was 6, training in both karate and full-contact kickboxing.

I must confess that my reasons for starting aikido were not good. I was considering a career as a professional karate teacher. But at the time, I considered that techniques were for the purpose of expressing our physical capabilities.  Therefore, as far as I was concerned, the effectiveness of a martial artist – and therefore, their value – was mostly due to their athletic abilities. Of course, I thereby dismissed all the "old" people (more than 40 years of age), and women and children as well. (Yes, I know, this is pathetic, even for a twenty-one years old).  At any rate, I was looking for an art that could suit this population, and I considered tai chi, yoga and aikido. At the end I choose aikido, thinking that at least I could learn some joint locks along the way. Yes - bad reasons.

The seminar was 110 miles away, Paris to Le Havre, and I wasn't expecting much. Therefore, the huge number of practitioners surprised me. There were maybe 300 students, all eager to practice. Then a very old small man walked slowly to the shinden, (He was only 62, but remember, I was 21), and I was thinking, "This will be a very very long weekend.". The preparation didn't change my mind. We practiced a long series of movements in seiza. My knees were in agony, used only to a brief mokuso at the beginning and the end of training.

Then he made a sign to a young student who attacked him. And I was stunned. For the rest of my life, I will never forget the feeling of awe that I had during the whole weekend. I had read about martial artists practicing with something beyond ordinary athletic abilities, I had read about old masters easily handling young men. But I have never witnessed nor felt it until that moment.

I saw Tamura sensei simply toying with a member of my new dojo, a man who was both an elite policeman and a boxer. When he worked with me, I felt absolutely controlled.  I was repeatedly thrown and pinned to the ground. As I had no experience in aikido, I couldn't be compliant, even if I wanted to. This weekend changed my life forever. Within a few months I stopped practicing karate and kickboxing, and devoted myself to aikido practice. What was it like to receive a technique from Tamura sensei?

I practiced with Tamura sensei during 15 years, starting in 1995, and his technique changed over this period of time. In earlier years, his technique was very precise, even sharp.  It was also painful.  He did not inflict pain gratuitously, but if one didn’t follow the movement, it hurt, not in excess, but it was always present if you resisted or deviated from the "line".  Remarkably, it was a pain you seemed to inflict on yourself, because when you actually followed the movement, the pain disappeared.

In 1998, I went to live in Japan for a few years, living close to the Aikikai Hombu dojo. Tamura sensei would visit regularly, and I always managed to be present when he did. He would never miss the Saturday morning practice at eight.  It was one of the classes he used to give when he was an uchi-deshi. When he went on honeymoon with his wife in 1964, he asked Sasaki Masando sensei to replace him for a few months. He ended up living in France, and never gave the class again!

Although Tamura sensei would teach some classes when he was back in Japan, he never did so on Saturday morning; instead, he would simply practice, just like anybody else. Many people were dying to practice with him on these days, and usually, he worked with two or three training partners. I was fortunate to be one of them.

Tamura sensei’s way of executing technique was, of course, suited to his body. Taller than Osensei, he still was small compared to the majority of westerners. He developed a way of unbalancing aite towards him. As he was smaller, it felt as if you were falling into a void. It was very effective, although it is not something easily done to somebody of one’s own stature or smaller.

Another thing that characterized Tamura sensei's work was the constant pressure he put on you. He never let you breathe, always closing the space, leaving you only one way to attack him, the one that was perfect for him to control. His kiai was unforgettable, a very strong roar coming from the deepest of his body. Its power was very surprising considering his small build. 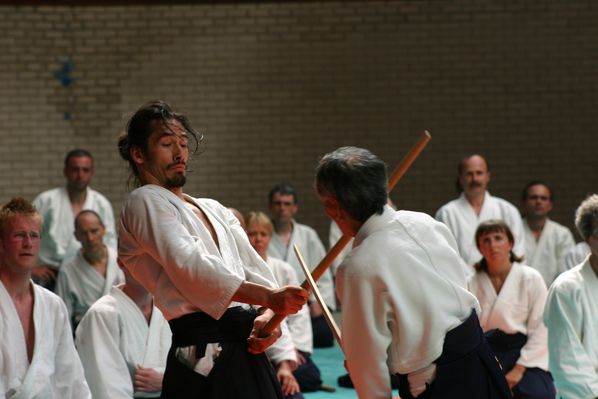 A Transformation: The influence of Kuroda sensei

Sometime between 1998 and 2001, his technique changed dramatically. There was no more pain! I was amazed, and at the end of one lesson, I was bold enough to tell him so, saying, "Sensei, it's incredible, I don't feel pain anymore when you're applying techniques.". He smiled, winked at me and said, "Because it's not necessary.".

Tamura sensei not only changed how he applied techniques, his overall form  - his operating system, if you will - also changed. When he was a young uchi-deshi, he was mocked as being a carbon copy of Osensei. At the end of his life, however, one could not help but notice that his techniques were very different from the ones he learned from his master.

Tamura sensei was both a passionate practitioner and a researcher. I suspect that he was always looking for a way to make things better. Not everything he came up with was worthwhile. He made some changes that he abandoned later, going back to the previous method. Sometimes, he changed to something new yet again. His greatest influence in recent years was, undoubtedly, his discovery of Kuroda Tetsuzan sensei, of the Shinbukan Dojo. It had an incredible impact on his work.

The influence of Kuroda sensei on Tamura sensei's work is a subject that I've avoided talking about. It wasn't something that Tamura sensei tried to hide and, in fact, he talked about it on many occasions, on film or recordings. I chose, however, to publish only some excerpts of his conversations about Kuroda sensei, because I had the feeling that it might be used to attack Tamura sensei, were it widely discussed. There have been critics of Tamura sensei's work, some going so far as saying that he was a fraud, not really even doing aikido, and I didn't want to give them any more pretext to attack him. The harshest critics were in France, where there are two big federations and a number of small groups, all fighting each other. (Yes I know, they should put aikido in practice, live and let live but hey, they're humans I suppose). At any rate, for those familiar with Kuroda sensei’s methodology, it was right in front of everyone’s eyes when Tamura sensei started to move.  Here are some examples of things that inspired Tamura sensei, that you could see in his own practice. Kuroda sensei’s:

- sword grip, with the little finger not holding, but hiding the tsuka gashira

- ukemi, front and back,

- breathing exercises that he used to end his lessons

- principles of movement, such as tōsokudo (constant speed), etc…

- iaijutsu, which Tamura sensei practiced privately, as far as I know only demonstrating twice in public (once in a seminar in Thailand, once during a seminar that I was giving at his dojo)

Tamura sensei has always had very sharp techniques, something one can see in the oldest films of him. As the years passed, Tamura sensei’s touch became softer and softer, although he never lost that sharpness that is, perhaps, his trademark. When he discovered the Shinbukan, his empty- handed practice became more and more an expression of the sword. In fact, at the end of his life, his movements would sometimes make little sense, if you didn't consider them literally as a tegatana (sword-hand).  What inspires me the most is what I felt in Tamura sensei’s last years. His touch was so light and his technique so pure, completely rid of any unnecessary movements. Once you understood the frame of his research, his teaching reached another depth. I had encountered two kinds of adepts during my own career within martial arts. The first type is the heir of a tradition. He learns the tradition scrupulously and, even if he has his eyes open to what happens elsewhere, he rarely "borrows" things. People like Kuroda Tetsuzan personify this. Such people can make their art evolve, they can even add their own discoveries, but they don't incorporate things from other ryu.  They would consider that to be a form of stealing. On the other hand, you have people taking whatever they like, anywhere they find it. I suspect Takeda Sokaku and Ueshiba Morihei to both be this kind of man. Their inspirations can come from many different sources, but they make all of it their own. Tamura sensei was also this kind of man. In this sense, I believe that he shares the genius of his master.

So consider Tamura sensei in the 1990’s, eager, as always, to improve his aikido. He heard of Kuroda sensei, and discovered his practice through books and films. Given his position, he could not become a student of the school, although he stated in a published interview I did with him that he would have liked to do so. Still he contacted Kuroda sensei and went to meet him. Through this, he found enough to feed his research, and deeply transform his practice.

I have been a student of Kuroda sensei since 2004, all the while continuing to train with Tamura sensei.  As best as I can tell, he managed to understand and adapt some of the finest principles of the Kuroda system. Furthermore, he did this without any of my help because, like any students of the Shinbukan, I gave my word to never teach or show anything from the school. I didn't hide the fact that I had joined the school to Tamura sensei, but, a perfect gentleman and knowing its rules, he never asked me anything on the subject. An inspiration to thousands

Tamura Nobuyoshi died peacefully, with beautiful dignity. He had cancer, and was very weak.   At one point, he decided he had enough. He took out all the tubes from his body, got up from his bed and stood within his wife’s embrace. He died, standing.

He told me once that he was too stupid to have ever invented anything new, but that he may have managed to do a few improvements. He truly did that. But more important, he has been an inspiration to thousand around the world… and to me. Thank you sensei.